During the late 70's, the only two radio stations that were on in my household were ones out of Lebanon, NH and Claremont, NH. Their focus? Adult contemporary. As a matter of fact, my old stomping grounds was like that town in the Footloose movie; instead of outlawing dancing, mine outlawed hard rock! So I became very familiar with Barry Manilow, Ambrosia, LeBlanc And Carr, England Dan And John Ford Coley, Seals And Crofts, Linda Ronstadt, Eric Carmen...you get the idea. Years later, I can now look back at those days and say "I miss those stations." As you know, The Retro Attic keeps trying to bring back those missing sounds.

Another band that got played frequently on those stations was Firefall, a Colorado band that scored 6 top 40 hits and is still touring with a couple of the original members; check them out at Firefall's Website. Everyone best remembers them for "You Are The Woman," "Strange Way" and "Just Remember I Love You." If you know today's featured single, then I think you will agree that there are occasions(the acoustic guitar especially) when it sounds very similar to "Just Remember I Love You." That probably explains why it fell just short of the 40; the "If it ain't broke, don't fix it" concept didn't always guarantee huge follow-up success(think of Edward Bear and The Soul Survivors).

You can hear this great lost Firefall platter and many other seldom heard soft rock numbers from the late 70's(Mesa, Euclid Beach Band, Boatz, etc.) by accessing the player on The Retro Attic's webpage. Thanks for your continued support! 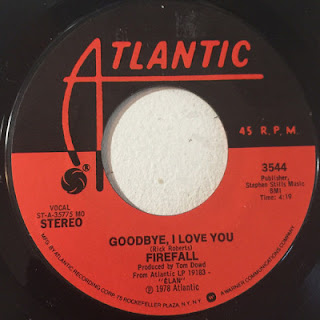 Posted by Gilbert Matthews at 6:09 AM